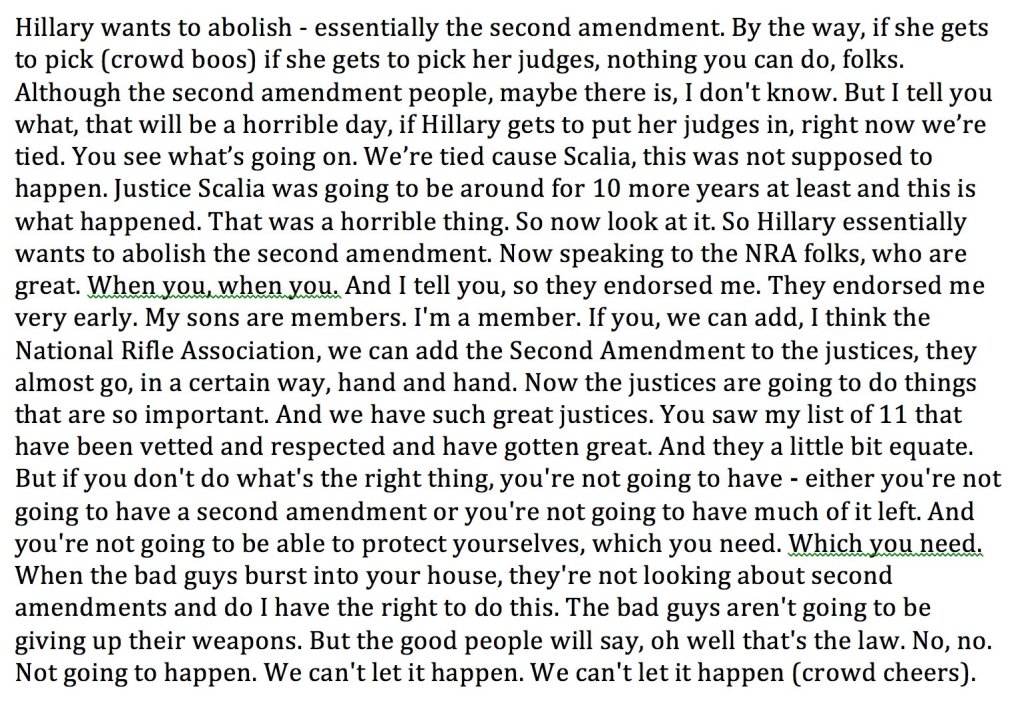 I’ll start posting regularly from now on, but something today caught my eye that I find really, really fascinating. You can read the text above, which of course comes from Donald Trump, the human Cheeto running for president.

For all practical purposes, this election is already over. Barring an unforeseen catastrophe, it’s only a matter of how much Clinton will win by. So why not sit back and enjoy some good old-fashioned word sleuthing?

The first thing worth noting is that Donald Trump isn’t explicitly calling for Hillary Clinton to be assassinated. This isn’t how serial abusers behave. To read more, click this link on domestic violence. It outlines how *hints* work, and how structural violence is used to alter behavior, and makes the connection to mass violence.

What Trump did here is he used implicit language. When we talk about something being implicitly stated, we’re talking about an understanding that remains unexpressed. When a mob boss tells you he would hate for anything bad to happen to you because you didn’t pay him his money, he is not actually suggesting that he cares about your feelings. There’s an implicit understanding in this message: he will hurt you if you don’t pay him.

Now look at Trump’s words: “By the way, if she gets to pick her judges, nothing you can do, folks. Although the Second Amendment people, maybe there is, I don’t know.”

He is not explicitly calling for Hillary Clinton’s assassination. What’s he’s doing here is implying that people who own guns can do something about Clinton. He didn’t call on them to vote, and he used the qualifier “I don’t know” to imply that he’s washing his hands of whatever message his followers take from his own words.

So there are two things going on: