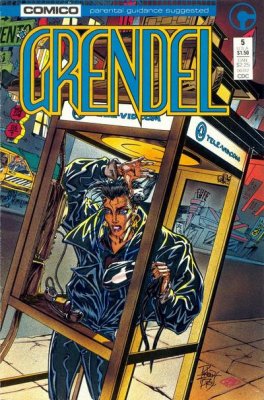 Grendel and Tujiro fight on the rooftop across from Brian Li Sung’s apartment, trading blows. Rather, Christine tries to hurt Tujiro without any luck, while Tujiro easily lands a couple painful blows. Christine’s ingenuity allows her to score a minor victory: using the electric shock on her weapon, she ignites a fire to hold the vampire back. Then she ducks another blow and Tujiro’s fist goes through the exterior of a water tower.

Water hurts the vampire just as much as fire.

Call it a draw with maybe a little edge in Christine’s direction. But even though she manages to force the vampire into retreat, she quickly realizes that Brian saw everything from his bedroom window. Christine feels herself spiraling out of control. On a phone call with her friend Gin, she confesses that it seems as if she’s losing everything. When Gin mentions the police bothering her again, Christine’s anger boils over. The police are clearly part of the problem, in her opinion.

Brian, too, gets a visit from the police. But even though Brian clearly wants no part in Christine’s feud–and has yet to learn the truth about Tujiro–he won’t help the police catch Christine. Brian is obviously feeling out of place, and for good reason: this isn’t the type of stuff that happens to normal people. He’s the quintessential bystander, thrust into something he doesn’t fully understand.

Before the end of the issue, Gin, too, will be forced into another confrontation with the police. Except this time, she’s sent directly to Argent.

The carnage toll is picking up. In addition to murder, Christine can add arson to the list of offenses. Not only that, she’s now convinced that everyone involved in Tujiro’s touring troupe is in on the slaving ring. She’s losing hope, and she’s beginning to dehumanize everyone involved with Tujiro. Everyone except Brian Li Sung.

What happens when this is all over? Will she be able to relinquish the mask? So far, the mask and the fork are a means to an end: the death of Tujiro. But Christine’s experiences with the police–and her own knowledge of Hunter Rose’s life–might make that impossible.

Lettering by: Steve Haynie, who’s done a ton of comics. But what does a letterer do? Well, I couldn’t find any good info on Haynie, but here’s an interview with Jared Fletcher about lettering for comics.

The shoulderpads … are getting outrageous. There’s one scene where Christine Spar looks like she has the body of The Rock, for crying out loud.

Next: Grendel #6: Challenge the Devil

Previous: Grendel #4: Touch Not the Devil