Gin’s interrogation at the hands of Argent proves … problematic. Argent isn’t in a position to be aggressive, even though he truly believes Gin is hiding information about Christine. Argent chooses a different tactic: he intentionally upsets her in the hopes that Gin, pissed off, will make a mistake that the police can capitalize on.

It works. Gin contacts Christine at a fast food restaurant and declares she’s flying out to San Francisco. A police officer, tailing her, gets the number of the hotel Christine is hiding in.

Christine, meanwhile, has another encounter with Tujiro–this time, he’s sitting at the foot of her bed! Is he an illusion, or is he really there? The room stinks of sulfur. He tells Christine he plans on taking Brian that very night, and he invites her to join him so he can taste her, too. Christine responds by throwing the Grendel fork at him, but he disappears. Was he ever really there?

Christine confronts Brian with the truth. Brian at this point has clearly lived a pretty innocent life … even the idea of a slaving ring seems impossible to him, to say nothing of the fact that Tujiro is a vampire. But Christine shares her bugged recordings with him. Whatever innocence he had is gone now. The world he understood is gone. The life he used to have–and his job as stage manager–is gone. 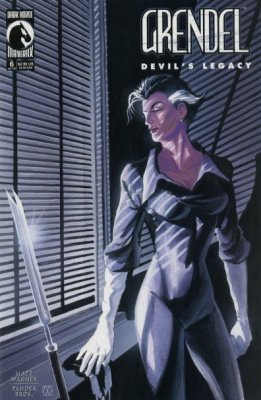 And when Tujiro bursts through the window, Grendel is his foe.

Machiavellianism: It could be said that everyone in this is being somewhat manipulative for personal gain, and it could also be said that both of our “heroes” are seeking justice. Christine wants justice for her son; the police and Argent want justice for the terror of Grendel. But Machiavellian behavior is rooted in duplicity manipulation, with a cynical disregard for morality.

Christine employs this when she deceives her friends to achieve her own ends.

Argent and the police employ this when they interrogate their suspects and break the law in order to bring Grendel to justice.

Tujiro employs this in his Kabuki dance.

About Comico: They had a good run in the 80’s, carving out their own niche with originals like Grendel and Mage (another Matt Wagner creation), plus The Fish Police and Elementals. They also had some licensed stuff, too: Johnny Quest and The Rocketeer among them. But Grendel was always the flagship comic, and it wasn’t long before Comico attempted to break into the newsstand business and things got dark fast. Comico went into bankruptcy soon after the last issue of Grendel.

But not before publishing Sam and Max, which is hilarious and worth checking out.