Don’t shed a tear for Captain Wiggins. As Grendel #16 opens, we find that the one-eyed cop who–along with Argent–hounded Christine Spar (and later killed Brian Li Sung) has made it safely to retirement. Set decades into the future, we open on a beach where an aged Wiggins–balding and shriveling–is enjoying his retirement sipping drinks brought to him by a robotic waiter.

Wiggins announces that he has a story to share–not one of Li Sung or Spar but instead a story about the original Grendel, Hunter Rose. His story begins, appropriately, at New York’s police headquarters …

Detective Lewis Polk has made the mistake of using the restroom just as a pair of higher-ups enter, openly discussing kickbacks from a mysterious benefactor. Polk decides to do a little digging, and follows his superior, Captain Dylan–it turns out Dylan is involved in some hefty shit related to diamonds. Specifically, the diamonds sold by Ed Wiesburg. After a little digging, Polk learns that the New York Diamond wholesalers are about to make their opening bids on diamond prices for the new fiscal year.

And it looks like Wiesburg is gonna bid low. Real low. Even worse: Wiesburg is possibly smuggling in diamonds in order to bid low enough to wipe out his competition. Even even worse: he’s not gonna cut Grendel in on the action.

At this point, Grendel is a side-character, operating in the shadows. Everyone knows who he is, but Wagner masterfully keeps him on the periphery. It works well with the mystery because the very threat of this unknown figure seems to permeate every single panel. People are afraid. When Grendel’s name is mentioned, eyes widen. Grendel is this mythological monster of New York City.

So why would anyone want to cross him? Polk digs deeper and learns that Wiesburg’s health is waning–he’s being attended to by his daughter, Esther, and his son, Ray. Both siblings are unbearable, but Polk senses something hidden underneath the facade. He breaks into the office of their lawyer and confronts the lawyer with evidence that Ed Wiesburg’s will has been altered. The lawyer confesses the truth:

Esther forged her father’s signature. And since his health has taken a turn for the worse, he now follows whatever directions she gives him. There is no diamond smuggling ring. It’s all intentionally orchestrated by Esther so that Grendel will catch wind of it.

Polk makes the mistake of speaking openly about this with his partner, and it isn’t long before he finds himself in a dark interrogation room with the Wolf himself: Argent. Argent relieves Polk of the investigation–he has the authority to do so, putting him above the law.

The night of the big diamond banquet arrives, when every diamond wholesaler will make their opening bid on the diamond market. Polk rushes there to confront Esther. Grendel arrives and announces that he has, indeed, heard the rumors of Wiesberg. But before he can kill Wiesberg, Argent arrives. The two proceed to fight directly on the banquet table while horrified guests watch.

Wiesburg, terrified, suffers a heart attack. In the middle of their battle, Grendel disarms Polk. Esther’s brother, Ray, picks up the gun. She lets him in on her scheme to take all of their father’s riches–greed gets the best of Ray, and he shoots Polk dead.

Grendel escapes into the night, but not before setting fire to the building.

This is a mystery from start to finish. Slowly, the tension builds as the principle players are revealed. There’s a classic red herring–the fake smuggling ring–that fools not only the reader but Grendel himself. Polk must go behind his superiors’ backs to accomplish anything because he’s unsure how deep this conspiracy goes. In the end, his own obsession with justice forces him to the banquet. 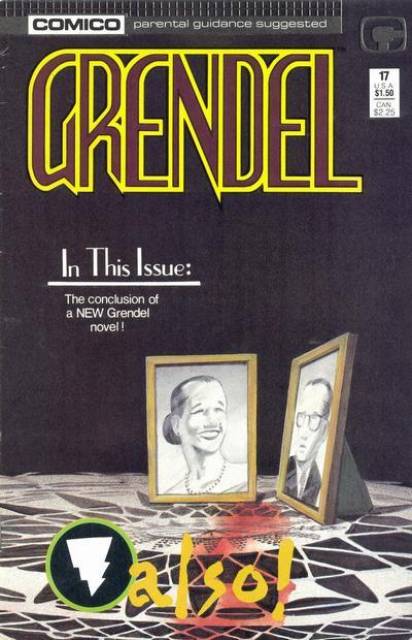 Grendel operates in the shadows. It’s obvious from the way he’s discussed by the other characters that he’s something to be feared, and it works incredibly well in the story. He’s a monster, like Argent–who hides in literal shadows when dealing with Polk–and his mythos forces nearly everyone to consider him when they make any decisions.

The structure of the story is small panels with lots of close-ups, and a couple splash pages toward the end when Grendel and Argent do battle. With so many squares per page–25, usually–the text gets almost equal billing. There’s no narration here, no internal thoughts except a couple asides from Polk as he struggles to understand why his wife and children left him.

At the end of it, this is a story told by Wiggins, for the purposes of making money in retirement. And while he may think this is nothing but useful–profitable–entertainment, Wiggins is unwittingly building the Grendel mythos and making Hunter Rose popular all over again.

It won’t come without consequences.