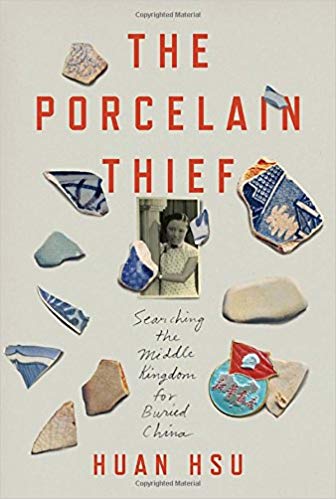 Huan Hsu’s non-fiction account of his family history, dating back to the late 19th century, is an absolutely fantastic, enlightening read. Hsu begins a journey through his family tree after learning about his great-great grandfather, who collected porcelain and eventually hid it in the lead-up to World War II, when Japanese soldiers were ravaging the Chinese countryside. Hsu decides to take a job at his uncle’s company in China as an excuse to dig up the porcelain. But first, he needs to find it.

Hsu moves between family history and current events as he navigates modern China as an outsider, having grown up in the United States and knowing some spotty Mandarin. His writing is detailed, poignant, and oftentimes funny. When he arrives at his uncle’s company, he learns very quickly that everyone has an English name except him. Sometimes, people pick standard English names (like John or Mary), but other times Hsu is baffled to learn people have simply taken English words they like (Dragon, Viking, Zeus, and Winter). Unable to function entirely without a translator, Hsu documents the various shocks he receives living in China, including nearly being run over by cars multiple times because no one seems yield to pedestrians.

Hsu’s shock is the reader’s benefit. Hsu isn’t afraid to criticize what he sees, and he oftentimes finds himself at odds with China’s culture. Hsu’s frustrations are a learning experience for any reader who doesn’t know much about modern China. What makes Hsu’s book stand out is his ability to find the beautiful anywhere he goes, even when he’s annoyed–by the cars, by people spitting, by substandard living conditions. It’s honest without coming off as overly negative. I came out of it with a fresh understanding of China’s ethical philosophy toward copying–an issue we’re currently navigating as countries attempt to crack down on intellectual property theft. From Hsu’s book, it’s easy to understand China’s side of the issue: they’re playing catch-up, and the act of copying is rooted in their history. Hsu documents one example of a pair of competing video stores who change their names to one-up the other (one calls itself the “Best,” the other responds by changing its name to remind people “No one is better.”)

When Hsu begins documenting his family history, the names take a little time to get used to. But it’s worth the extra time because the family history is a microcosm of China’s modern history. We don’t read much about the Japanese atrocities before and during World War II. Hsu’s family lived through it. They became refugees in their own countries, fleeing as Japanese soldiers ravaged mainland China. Women were raped. People were slaughtered. Even more horrific tragedies were forced upon Chinese civilians by Japanese soldiers.

Hsu’s family persevered (to some extent), and the story of their perseverance through the reign of Mao and the Cultural Revolution taught me so much about family and history.

Does Hsu find the porcelain? By the end of the book, you won’t really care all that much, because the journey has been so wonderful. I treasured this book. I hope you’ll give it a chance, too.