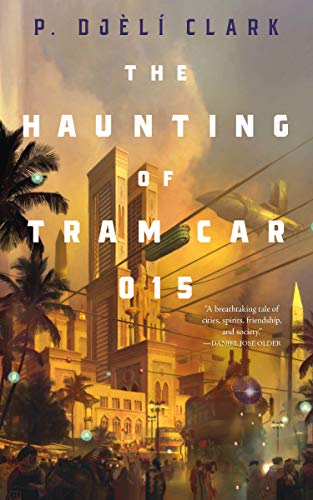 I’m starting to notice a pattern in the books I’ve read. No, it’s not a pattern that the authors themselves are responsible for. Rather, I’ve noticed that when it comes to my favorite books, rarely do I remember much about the ending. Take, for example, The Haunting of Tram Car 015, by P. Djèlí Clark:

Cairo, 1912: The case started as a simple one for the Ministry of Alchemy, Enchantments and Supernatural Entities — handling a possessed tram car.

Soon, however, Agent Hamed Nasr and his new partner Agent Onsi Youssef are exposed to a new side of Cairo stirring with suffragettes, secret societies, and sentient automatons in a race against time to protect the city from an encroaching danger that crosses the line between the magical and the mundane.

I can’t for the life of me remember much about the ending, other than I found myself quite satisfied. What I do remember is an inventive, fantastical story that took me to the city of Cairo and immersed me in Egyptian folklore. Clark’s work shows that readers don’t have to be content with exploring the same familiar fantasy worlds that are dominated by white characters in pseudo-European settings. And I fucking loved every moment of this book.

Imagine, for a moment, that you find yourself in the precarious situation of navigating a world in which Djinn and spirits exist. Where magic is real and society has attempted to come to terms with this in a (mostly) rational context. Now place yourself in an unfamiliar culture, in an unfamiliar setting. Now throw yourself into a job that requires you to navigate both this magical world and an inefficient bureaucracy. That’s Clark’s setup. What adds to the magic are the wonderful characters who behave entirely rationally (given the unpredictable nature of spirits!) and in an entirely human fashion.

I love this novella. I think you should buy it not just because it puts you in a culture you normally don’t read about in popular fantasy works, but more importantly because Clark is a master storyteller and he deserves to be read.